The lion has become an iconic tattoo symbol for decades – most likely due to its representation of bravery and courage (and for the fact they look cool).

Considered the great brave hunters of the animal kingdom, it’s no wonder the lion is synonymous with king. They’re muscular and ferocious, and while most cats are considered to be cute and cuddly, coming into contact with the sharp claws and pointed fangs of a lion would be a recipe for disaster.

Lion tattoos are more common among men but there are many designs that we’ve seen on females that are absolutely amazing.

Have you ever considered getting a tattoo of a lion but have felt unsure of what style, design and placement to get? Well, you’re not alone. One of the most exciting parts about getting a tattoo is the contemplation period where you start deciding the specifics about your tattoo. To help, we thought we’d break down the various styles and meanings of lion tattoos plus the ideal placements.

The lion has been commonly referred to as the king of the jungle and is often associated with royalty and nobility, so much so we see imagery of lions on family crests. We even call a group of lions ‘a pride’ because of their regal appearance.

Some people like to get lion tattoos because of its link to royalty. It helps symbolise a desire for nobility or leadership. If this is the intention, then it is quite common for people to opt for a lion with a crown tattoo.

Throughout history in many cultures, lions have been depicted as being courageous. After all, have you seen Harry Potter? Gryffindor represented courage and a lion was the symbol on their flag. If you’re a fan of the Harry Potter series (and a Gryffindor), that might be enough reason alone for you to get a lion tattoo. In many instances people choose a lion king tattoo to represent a challenge they have overcome or fearlessness.

As much as the lion is ferocious and fearless, they’re also considered to be a symbol of peace. The whole idea around the lion being peaceful comes from the concept that while lions know they have the power to succeed with their strength alone, they also choose to be peaceful.

It’s this meaning that tends to make it quite a popular design among women. A lioness or lion tattoo for women can still have a feminine look, if the client desires, and this can be achieved through certain use of line or colour.

We’ve already mentioned that there are many Harry Potter fans out there walking around with king lion tattoo designs, but other pop culture references that are increasingly making their way onto our skin are the characters from The Lion King. We’re regularly having clients come in and ask for a Mufasa tattoo or a Simba tattoo to symbolise their love or nostalgia for the film.

Lions have quite a prominence in certain religions. In Christianity, the lion is represented in many stories and teachings within the bible, notably representing Jesus. The Rastafari culture also has some similarities to Christianity when it comes to the representation of lions, but rather than the lion representing Jesus, it represents the second coming of the Messiah. It is also quite common to see a rastafarian lion tattoo next to tattoo imagery of cannabis leaves.

There’s no hard and fast rule for where you should place a lion tattoo. Ultimately, it will come down to the design you have chosen. For example, a lion forearm tattoo needs to be designed in a way that it fits the width of the forearm without compromising the scale of the design. Most forearm tattoos of lions do tend to be of a lion head for balance reasons, but it is not impossible to do a design of a full lion – especially if part of a lion sleeve tattoo. Other popular placement options may also include a lion back tattoo or a lion chest tattoo. 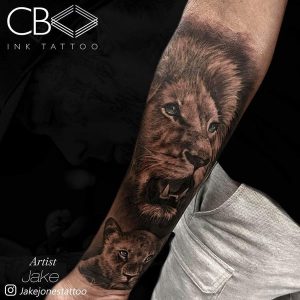 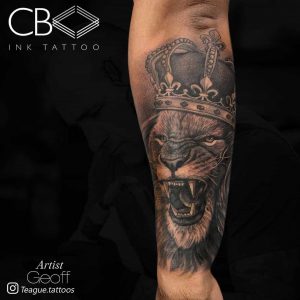 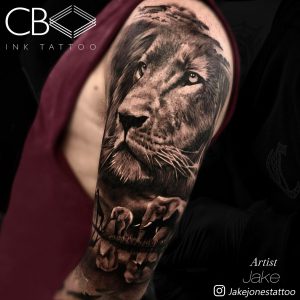 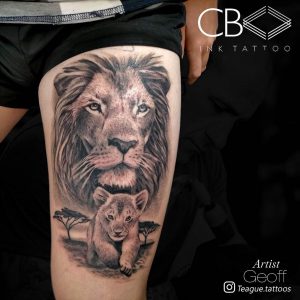 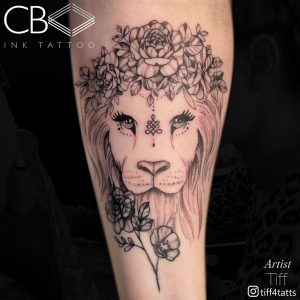 Your Complete Guide to Full-Sleeve Tattoos
Scroll to top

This site uses cookies. By using this site or closing this message, you're agreeing to our use of cookies.

We may request cookies to be set on your device. We use cookies to let us know when you visit our websites, how you interact with us, to enrich your user experience, and to customize your relationship with our website.

Click on the different category headings to find out more. You can also change some of your preferences. Note that blocking some types of cookies may impact your experience on our websites and the services we are able to offer.

These cookies are strictly necessary to provide you with services available through our website and to use some of its features.

Because these cookies are strictly necessary to deliver the website, refuseing them will have impact how our site functions. You always can block or delete cookies by changing your browser settings and force blocking all cookies on this website. But this will always prompt you to accept/refuse cookies when revisiting our site.

We fully respect if you want to refuse cookies but to avoid asking you again and again kindly allow us to store a cookie for that. You are free to opt out any time or opt in for other cookies to get a better experience. If you refuse cookies we will remove all set cookies in our domain.

We provide you with a list of stored cookies on your computer in our domain so you can check what we stored. Due to security reasons we are not able to show or modify cookies from other domains. You can check these in your browser security settings.

We also use different external services like Google Webfonts, Google Maps, and external Video providers. Since these providers may collect personal data like your IP address we allow you to block them here. Please be aware that this might heavily reduce the functionality and appearance of our site. Changes will take effect once you reload the page.